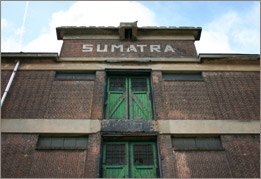 In 1819, an enterprising Young Dutchman, Jan van Rees, started a tea company in the Netherlands. By the mid 1800’s, the Van Rees Company had established a network of regular customers in Holland and Germany. Salesmen were employed to sell and distribute tea by horse and cart, then later by bicycle. The development of the company in the first 100 years of its existence amply shows the renowned Dutch qualities of hard work, the ability to trade and to create opportunities for business.

DRAWING ON RESOURCES AND EXPERIENCE

Subsequent generations of the van Rees family oversaw and furthered the growth of the business. There were hard times in the period 1939-1945 but the company drew on its resources and experience to survive those difficult years. From the mid 1950’s, a step-change took place within Van Rees. Firstly, by large-scale sales of blended tea to USA and secondly, by the opening of offices in other countries. By the early 1960’s Van Rees had offices in North and South India, Sri Lanka, Indonesia, Kenya and the United Kingdom. This was followed later in that decade by Malawi and Argentina, then in the mid 1980’s by the USA and Egypt. In 1976, Van Rees built a large warehouse and automated blending plant in Dongen, Holland, an operation which remains today as a fundamental part of our group. In the early 1990’s Van Rees established an early presence in both Poland and the CIS with the later addition of Vietnam and a representation China.

In the mid 1960’s, Van Rees became part of the NV Deli Maatschappij group and remained in their ownership until mid 2010, when the company was acquired into the sole ownership of Acomo N.V.

The history of Van Rees is one of enterprise and vision; seeing opportunities, building a group carefully and steadily. Successive managements have nurtured the Company and developed generation after generation of skilled and knowledgeable people on which the future of the group depends. This was written of tea in 1986:

“The assaying of tea is an art not a science. It is the man, and not his instruments, which is the most important”

Van Rees is proud of its long history as one of the oldest tea companies in the world.